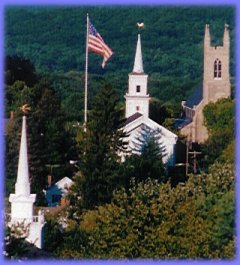 Newtown is a scenic “small town” located in Fairfield County in southwestern Connecticut, about sixty miles from New York City. Newtown is bordered on the south by Easton and Redding, on the north by Bridgewater and Southbury, on the east by Oxford and Monroe, and on the west by Bethel and Brookfield. Newtown is traversed by Interstate 84, U.S. routes 6 and 302 and Connecticut routes 25 and 34. It covers 38,644 acres or 60.38 square miles, making it the fifth largest town, area-wise, in the state. Newtown was established in 1711 and is comprised of the Borough, Sandy Hook, Hawleyville, Botsford and Dodgingtown “neighborhoods”.

The Town Seal may include the rooster weathervane located atop The Meeting House but for many, the symbol of Newtown is the 110 foot flagpole (10 foot is underground) in the middle of Main Street. In the winter, the 12 foot by 18 foot American flag is flown but in the spring, the beautiful 20 foot by 30 foot summer flag is raised by the Newtown Hook & Ladder Fire Co., under the supervision of former Police Lieutenant David Lydem, who is the “Keeper of the Flag”.

Newtown operates under a Charter adopted in 1961 and most recently revised in 2008. The Charter retains a limited Town Meeting form of government with an elected Board of Selectmen (3) supervising the administration of Town affairs, a First Selectman acting as the town’s Chief Executive and Administrative Officer, and a twelve member Legislative Council acting as the legislative body, with the exception of those items specifically enumerated on which the Town Meeting is authorized to act.  Financial matters are supervised by a Board of Finance (6) and an appointed Finance Director.

Printed Copies of the Charter are available in the Office of the Town Clerk at 3 Primrose Street.

The Borough of Newtown

The Borough of Newtown, located in the central area of Newtown encompasses an area of approximately 1,252 acres or one square mile. The Borough was incorporated in 1824 by an act of the Connecticut General Assembly. It is a unique self-governing municipal unit, one of only nine Boroughs located in the State of Connecticut